If you ask anyone who grew up in rural or small town Saskatchewan about Saskatoon berries, they have a story to tell.  I'm not talking about the conveniently cultivated U-Picks, where you park your car, grab your basket and head towards your allotted row.  Oh no.  I'm talking about wild Saskatoons - those grown on bushes along river banks, in coulees and on hilly farmland across the Canadian prairies.  For generations, the Saskatoon berry has been a hardy prairie food source.  Aboriginal tribes picked, dried and pounded the berry with dried bison meat to create pemmican, the preserved staple of their diet.  Settlers too relied on this nutritious berry to provide essential vitamins.  Fruit from the western species Amelanchier alnifolia resembles a blueberry, but anyone who has braved the prairie heat and countless mosquito attacks in July can tell you they taste nothing alike.  Saskatoons have a musky, almost almond-like sweetness; the sophisticated older cousin of the blueberry. Their deep purple skins and juice stain the hands as you deftly pick off the gnarled bushes.  It can be a battle, because of the bugs and the heat, but you pick, filling up one pail and then another, because there is nothing quite like the wild Saskatoon berry.  Baked into juicy pies or preserved in jammy jars of the darkest purple, I swear you can taste their history in every bite.

I grew up picking Saskatoons, as did my mom and her mother before her.  In late July, we would get together with my Auntie Jean and my cousins and drive out to Where The Saskatoons Are.  Finding wild Saskatoon berries is largely by word of mouth.  Someone tells someone where there is good picking, and the directions go something like this:  go south down the gravel road until you cross a bridge, turn east at the old Miller place then go another two miles until you see a clump of trees.  Searching for Saskatoons is always an adventure.  We were stuffed into a mini van, squished and stuck together like sweaty sardines, Duran Duran on the radio.  Once the berry bushes were spotted, we were sprayed heavily with bug repellent and each given a four litre ice cream pail and told to pick, not eat.  As if.  More berries went into our gobs than our pails, proof being the purple teeth at the end of the day. Those Saskatoons that did make it into the pails were accompanied by twigs and leaves.  Not child labour at its finest, we were then set free to run around and scare off all forms of wildlife except the chickadees who stuck around, cheering us on.  Our moms, the two sisters, picked pail after while while they confided and laughed with each other. My Auntie Jean had the best laugh.  Loud.  Goofy.  Happy.  From the depths of her belly, it would come out and grab you.  Hers was contagious.  And then it was gone.  On a frigid January morning in 1988, the small airplane she was on crashed, leaving her children without a mother, and my mom without her best friend.  After the untimely passing of someone so dear, life is never the same.  It goes on, but the absence of the departed lingers long after their light has gone out.

I don't recall picking many Saskatoons after my Auntie Jean passed.  By this time I was into my mid teens, and summer afternoons were likely spent chasing boys and sunbathing.  Fast forward to my 20s and I was living in big cities, going to University, the dusty gravel roads a long distant memory.  In my 30s, I picked a few times.  Friends of a friend knew of a spot.  That's how it goes, you see.  Now, I live in the city named after the berry, but oddly enough I have yet to discover where the wild Saskatoons are.  It's my intention this summer to find a clump of Amelanchier alnifolia bushes, perhaps along the winding South Saskatchewan River.  Oh but so many factors are at play for successful picking.  There must be enough rain in June to yield a juicy berry, that is if they have been fortunate to survive the common late spring frost.  If they've survived the frost and drought and birds who like them too, Saskatoons hang heavily, in purplish black glory for a few weeks every year.  If I'm successful in finding such a treasure, I'll be doing what generations of prairie women before me have done.  My hands, stained and sticky will slide the inky berries into the ice cream pail secured around my waist with a belt.  If I listen closely, over the buzz of the mosquitoes, perhaps I'll hear the long ago echo of children playing and sisters laughing.  The chickadees, cheering me on. 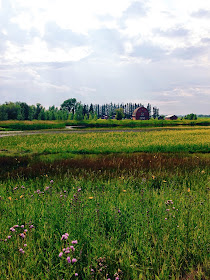 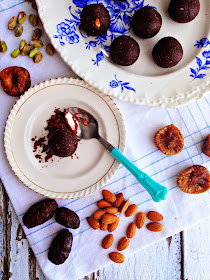 Energy balls, bites, bars, whatever you call them, are everywhere.  And rightly so.  They are full of protein, fibre and other healthy nutrients that make the body run just that much smoother.  If you have a food processor, you can make your own in no time flat, well, maybe just 5 minutes.  Save a few bucks and customize them as you like.  For my latest article in Culinaire Magazine, I created these little chocolate pistachio gems.  Dates, figs, nuts, and yes chocolate are major players here, so you know already they are going to be delicious.  These are great for a post-workout fix, a snack while you catch up on GIRLS or breakfast as you're running out the door.   Head on over here for the recipe. 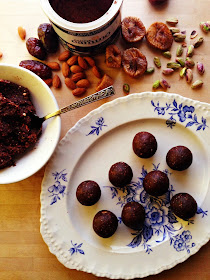 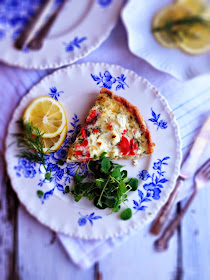 Happy New Year!
I hope 2015 is off to a grand start for all of you.  It's only been six days, but I can feel it's going to be a good one - I hope you do too.  I've been in full-on reflective mode.  A new year always does that to me; thinking back to what all transpired within the last twelve months.  Plenty of good things, the jump for joy good things, but also those moments that had me do the ugly cry and curl up into a ball.  Oh the agony and the ecstasy of life.  But somehow, we dig deep, and just get through it.  No doubt with a little help from our friends.  And chunks of dark chocolate and cheese; and new seasons of favourite shows (Downton!  GIRLS!) and the odd glass of red wine.  And whiskers on kittens.  You get my drift.  It's all in the details.  The minute, seemingly mundane things that make up a life, a year.  As the year flashes back, there's no need to connect the dots right away.  Oh but we try.  The thing is, with as much gratitude as we can muster, to recognize that each new person and experience is another dot on our map.  I hope your map for 2015 is full of all things beautiful and glorious.  Cheers to beginning again.